Giving the Gift of their Time, the members of Sigma Phi Omega, sponsored by The
Pruett Gerontology Center threw a “Nail Day” party for happy residents at a
local assisted living center.

Click the picture below or visit this link to see the video:
https://animoto.com/play/kUMDO7cUWZDfayYxz0BBlA

Highlights in the U.S. Chronology of Aging Policy Events 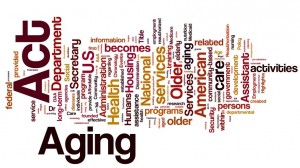 1950: The National Council on Aging founded

1954: Meals on Wheels, a home-delivered meal program for seniors begins in Philadelphia, Pennsylvania

1974: Housing and Community Development Act provided for low-income housing for older persons pursuant to the Housing Act of 1937

1984: National Institute on Aging created to conduct research and training related to the Aging process, the diseases, and challenges of an aging population

1990: Age Discrimination in Employment Act made it illegal for companies to discriminate against older workers in employee benefits

1992: Commissioner on Aging position elevated to Assistant Secretary for Aging

•• To serve as the effective and visible advocate for older individuals within the Department of Health and Human Services and across the federal government
•• To collect and disseminate information related to problems of the aged and aging
•• To gather statistics in the field of aging that other federal agencies are not collecting
•• To stimulate more effective use of existing resources and available services for the aged and aging, and to coordinate federal programs and activities
•• To carry on a continuing evaluation of the programs and activities related to the objectives of the OAA, with particular attention to the impact of Medicare, Medicaid, the Age Discrimination in Employment Act, and the National Housing Act relating to standards for licensing nursing homes and other facilities providing care for vulnerable individuals
•• To provide information and assistance to private organizations for the establishment and operation by them of programs and activities related to the OAA
•• To strengthen the involvement of the Administration on Aging in the development of policy alternatives in long-term care by participating in all departmental and interdepartmental activities concerning development of long-term-care health services, review all departmental regulations regarding community-based long-term care, and provide a leadership role for AoA, state, and area agencies in development and implementation of community-based long-term care. Source

1993: Dr. Fernando M. Torres-Gil becomes the 1st Assistant Secretary for Aging in the Department of Health and Humans Services

1997: Dr. Jeanette Takamura becomes the 2nd Assistant Secretary for Aging in the Department of Health and Humans Services

1999: International Year of Older Persons: A Society for all Ages

1999: Olmstead Decision of the US Supreme Court regarding ADA and community-based care

2001: Josefina G. Carbonell becomes the 3rd Assistant Secretary for Aging in the Department of Health and Humans Services

2006: Kathy Greenlee becomes the 4th Assistant Secretary for Aging in the Department of Health and Humans Services

2006: Older American’s Act reauthorized under the Senior Independence Act of 2006

2009: The Elder Justice Act of 2009 becomes part of the Patient Protection and Affordable Care Act, or “the Health Reform Act”

2012: Administration on Aging (AoA), reorganized as a division within the Administration for Community Living . Sen. Bernie Sanders (I-VT) first to introduce the bill for reorganization