Other Alternatives to Google Reader

Farewell to the powerful RSS jewel that was Google Reader. Unlike many public ed. classrooms, where trophies are given for just showing up, Google’s policy is that any product that is not viable ends up in the graveyard. Thankfully, Google gave us prior notice and also facilitated the migration of users subscriptions through a seamless integration with Feedly. With one click, users who opted for Feedly were able to move all their feeds to the new platform. Click here for the App at iTunes.

There are also several other powerful readers worth trying and in case you have not yet decided upon the one to use, check out this list. It contains some of the top readers available online and for free.

This phenomenon of Google’s putting on ice its unpopular products is not new. Several other services were taken down including Google Lab, Buzz, iGoogle..ect and the list goes on. Here is a graphic from Mashable that I saw in Med Kharbach’s post.  It traces a few memorable Google products, now in what is described as the “Google Graveyard.” 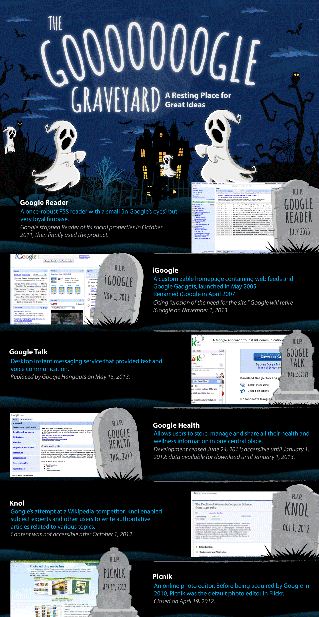 Retaining Reader data, including subscriptions, can be done through Google Takeout— Google Takeout’s Reader page. The Google Reader phase-out will also affect the Google App which you may have downloaded for your mobile phone. I have  not found an effective, free alternative to Google Reader so far. Newsblur is the closest in design and similarity of use, but there is a 64-feed limit for the free account.

This post on Lifehacker also describes how to export all your feeds and put them into a new reader.